The Winter Update has just been released, so let's briefly look at the new features and content which are in store for you:
The Tibia coins have been introduced to game with a new mechanic they are now droped by bosses and also obtained in rewards at Quests and Hunting Tasks! Using a Tibia Coin will give you 1 free shop point.
Vengoth Castle at Dawnport and Thais City have been introduced to the game this year as huge playable respawns with quests and mysteries! They both have interesting lore and content.
The player versus players battles are now for level 100 or higher to avoid harassment to new players.
The God Summon Bosses now are very strong and challenging to make even the advanture more interesting and they drop lots of cool rewards!
The Dark World also recived update with it's first dungeon and some new quests and areas. I will keep working in 2023 to introduce the rest of the Dark Dungeons and lots of respawns there.
Due Open Tibia player community standars, sadly, botting is now allowed in server. But only under certain circunstances. Massive botting or afk farming will be punished with the banishment of your account.

I want to give speical thanks to our contributors and the new contributors of the project that joined this year to make this dream possible. Wish I could name you all but the list would be too long! You can read about them at the memorial of Rookgaard Temple. The server made now the magic number of $ 100,279.00 MXN during the last 13 months. No donations to charity were made at this time. I can't Thank You enough for your support, our future looks brighter than ever and I will work harder to bring you the best rpg quality content.
I wish you a Happy New Year!

THANK YOU FOR PLAYING!
I hope you enjoy the new update,
Francisco Fonseca 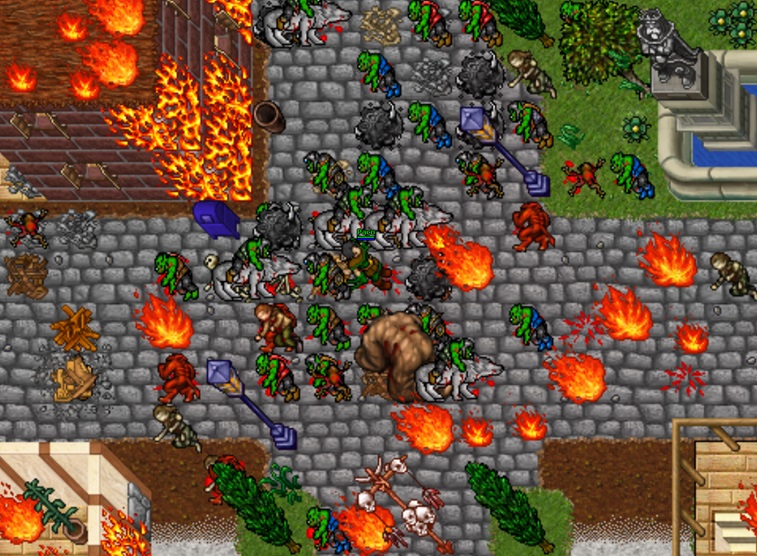 This is a fanmade game by Francisco Fonseca. Please, play and support Cipsoft's Tibia at www.tibia.com
Copyright Cipsoft GmbH. All rights reserved. Tibia is a registred trademark of Cipsoft GmbH.
The Dark World Update has just been released, so let's briefly look at the new features and content which are in store for you:
You may now explore a full new world of ruin inside of the brain of the crazy lady from Orc Fortress. You need to start the mission with Rapanaio NPC at the deeper dwarven mines. Once you complete his task, you may access to the insides of the Lady's brain and play in a mirrored image of the memories disturbed by her mental problems. It is recomended to play in team because the world is full of demons and overwhelming creatures. I need to explain you first that the Dark World is a playable prototype version of the game. I will be adding content during the course of 2022.
The Light World also received important updates. The dificulty of the game has been reduced with the intention of attract more casual players, the crafts have been removed from game, also a version of all the real Tibia Quests have been implemented in game, as exception of those planned to be used in the Dark World. The level limits between areas have been removed so may free roam everywhere once you obtain level 8, even take the challenge to access Dark World.
I want to give a very special Thanks to all our contributors of the project, some of them still support me, others don't but I'd like to give a special mention to Juan Sanchez, also known in game as player Yaba Daba Dooh for the mapping job of the Dark World his creativity is like magic, I just gave some examples to him of how the map should be, but all credits are to him. You will be amazed exploring Sanchez' Dark World, it has detail in every corner. I want to mention and thank our money contributors aswell because they are the fuel of the project, Lex, Taubateh, Yalel, Sanguine, Rudah, Kamikazeh, Ponteduro, Nephertys, Sir Archel Raynux, Sergei Archer, Nujabes, Fonkyo and many others that unfortunately the list would be too long to mention you all, but I appreciate very much your support and your time and story in my creation, the time we spent together, I cherish. All of you will be forever in my heart.
The server made now the magic number of $143,587.00 MXN during 11 months Game Shop. Yesterday $ 13,000.00 MXN were donated to National Alliance on Mental Illness. Visit their website at: nami.org/Home
$ 14,000.00 MXN were donated to charity at proninosdelacalle.org.mx/ in the month of June 2021.
A total of $ 27,000.00 MXN have been donated to charity.
I wish you a Merry Christmas and Happy New Year!
THANK YOU FOR PLAYING!
I hope you enjoy the new update,
Francisco Fonseca 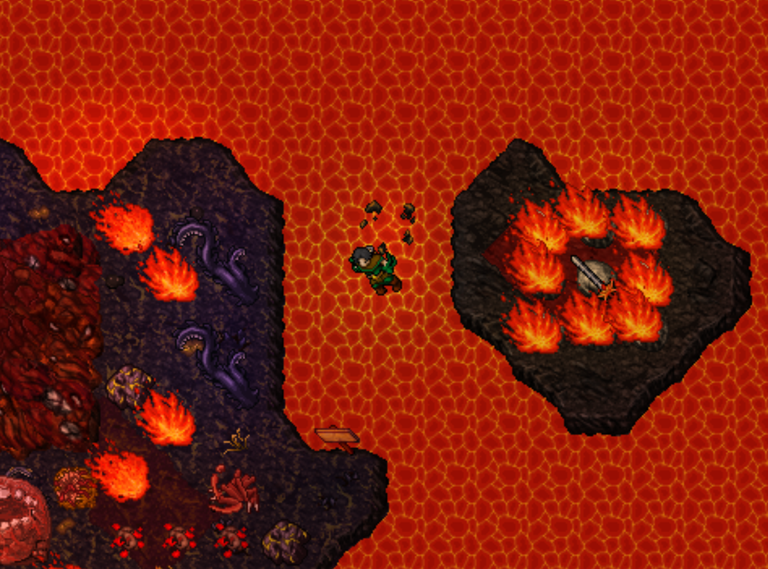 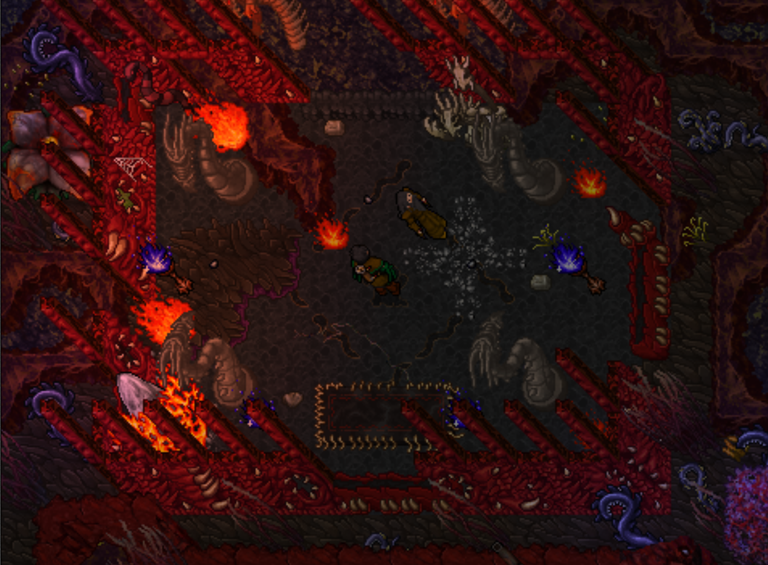 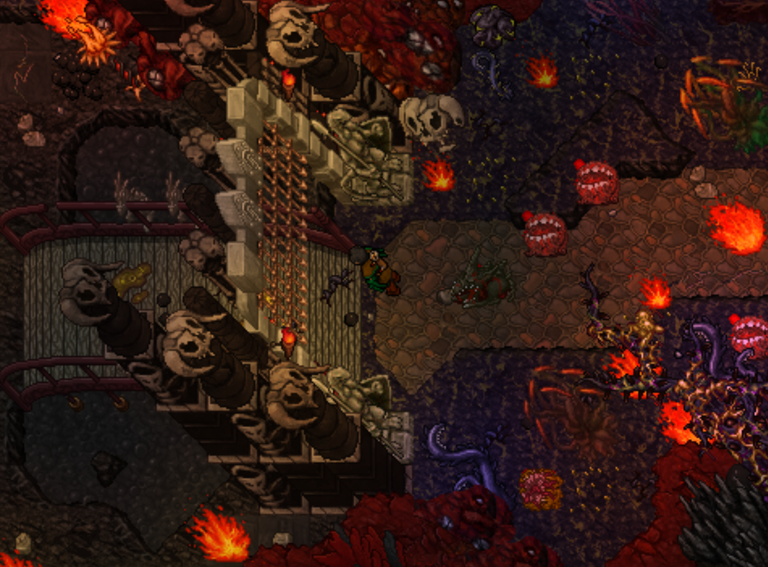 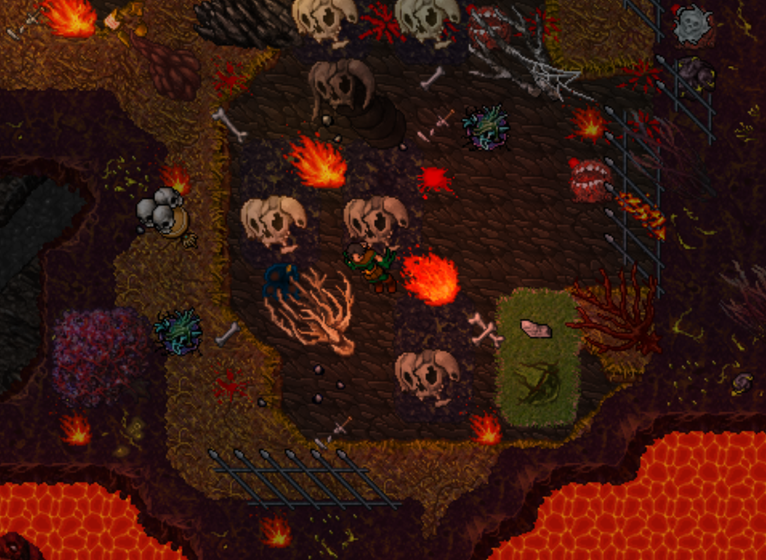 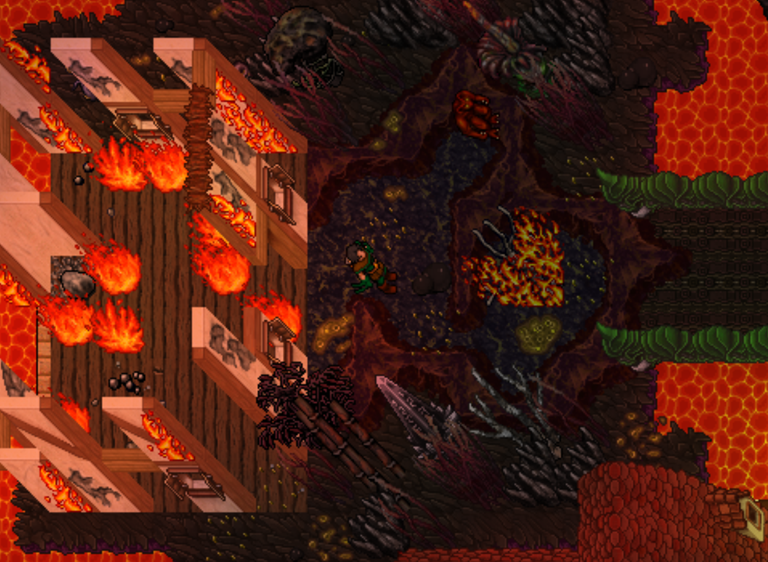 This is a fanmade game by Francisco Fonseca. Please, play and support Cipsoft's Tibia at www.tibia.com
Copyright Cipsoft GmbH. All rights reserved. Tibia is a registred trademark of Cipsoft GmbH.

The Spring Update has just been released, so let's briefly look at the new features and content which are in store for you:

Game recived a massive update, the client now includes all of the newest Cipsoft's Tibia sprites. This means I will be able to create hundred of new areas, quests, secrets and content for you. However this will require some time to do but don't worry, game will be expanded periodically with content as I can find time to work in the project.
Remember I have a real life and it is kinda hard for me to test everything before releasing, but if you find any issue or something doesn't feel alright don't rage, just send me a message and I can adjust it for a better gameplay.
Game will keep balancing due the introduction of new weapons in quest which may be a possible cause of disbalance. I will try not to cause an hiperinflation or any other of the Cipsoft's Tibia mistakes.
New event massive quests will be introduced for higher levels while the Dark World mapping is finished, also the store will be expanded periodicaly with new items, outfits and mounts.
THANK YOU FOR PLAYING!
I hope you enjoy the new update,
Francisco Fonseca 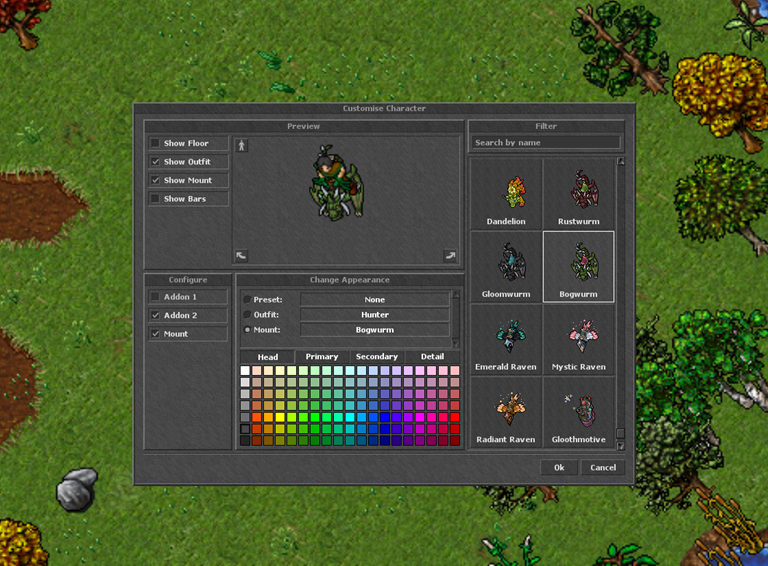 This is a fanmade game by Francisco Fonseca. Please, play and support Cipsoft's Tibia at www.tibia.com
Copyright Cipsoft GmbH. All rights reserved. Tibia is a registred trademark of Cipsoft GmbH.
The Winter Update has just been released, so let's briefly look at the new features and content which are in store for you:
The Old Mine has been expanded, the transport wagons were re located on strategic sites and now there are a lot of tunnels to explore and new areas!
The sunken zone has been expanded too with new areas to explore and dangerous hunts, for example a Behemoth cave or a Hydra Island with many new mysteries!
New NPCs have been added to the game, each one with new missions and lore for the game.
All of the Quest Visitors NPCs has now 100% chance of visiting the island on their respective day.
All of the Tibia game items are obtainable in game.
All of the Tibia magic spells are obtainable in game.
Tons of new quests for you to explore, and new mysteries waiting to be solved.
Now every player can get a pair of boots of waterwalking allowing you to walk in water to new zones with treasures and new adventures.
All of the raids has now more change to trigger. Even some raids are interactive now, for example you can visit a pirate island when the pirate ships invade the village.
All of the overpower items have been nerfed to regular tibia damage values.
New monsters.
Increased the dificulty of the game.
Now you can level up your summons.
Now you can fish items with the mechanical fishing rod, the better your skill the better the item you get!
Expanded the lore of the game in every corner!
New lore content for the "Dark World Update 2021".
Why expand the server? Does this still feels like Rookgaard? - Yes, in fact I will not focus or add other cities also won't add other depots, the game island will always be centred in Rookgaard, however I add new custom zones in every update but all of them will connect with default Cipsoft's Rookgaard somehow, this way doesn't matter if you are far away, still will have a reason to be and play somehow in Rookgaard. ... Let's get real for a second, it would be extremely boring if I stick just the default Cipsoft's Rookgaard, that's why as the server keeps alive I will expand it with content not out of context as other servers do. All the lore and zones will be connected to default cipsoft's Rookgaard somehow, also this will help the economy for the lower levels to sell their default Rookgaard items and creature products to higher level players.
In other news the Points Shop has been enabled. Is the game pay to win now? Well if you decide, everything in the shop can be obtained in-game without spend a dime. The shop is a desesperate move to save the server because If there is no money flow I will end closing the server FOREVER. So please, use the shop and try not to think about it as pay to win but a chance to keep enjoying the game. The game is still free premium account for everyone.
This is the last effort I make for this server game thing I've created, I 'll try some advertising but if we don't get enough players and money I will close the server.
In the other side of the coin if we sucess I 'll keep working in the Dark World Update for 2021. There are still a couple of details to do, but I will do it in the course of the Jan 2021.
I wish a Happy New Year for you guys and for me, we deserve it.
THANK YOU FOR PLAYING!
I hope you enjoy the new update,
Francisco Fonseca 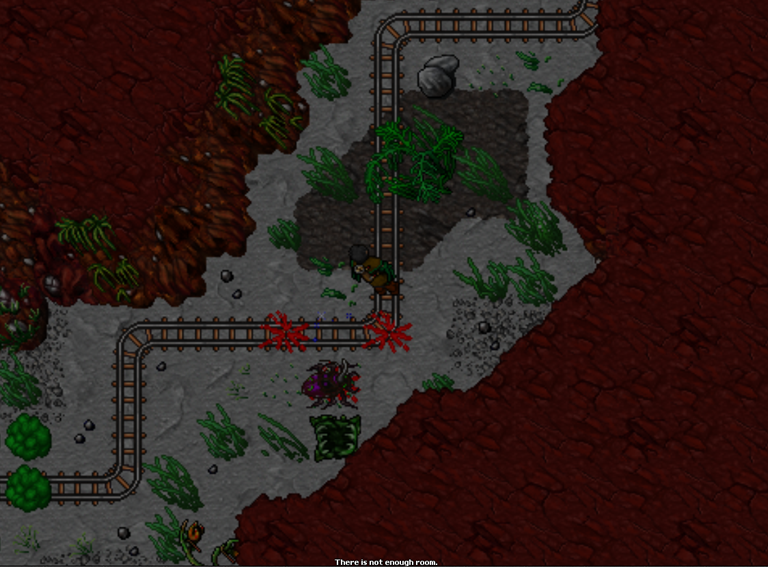 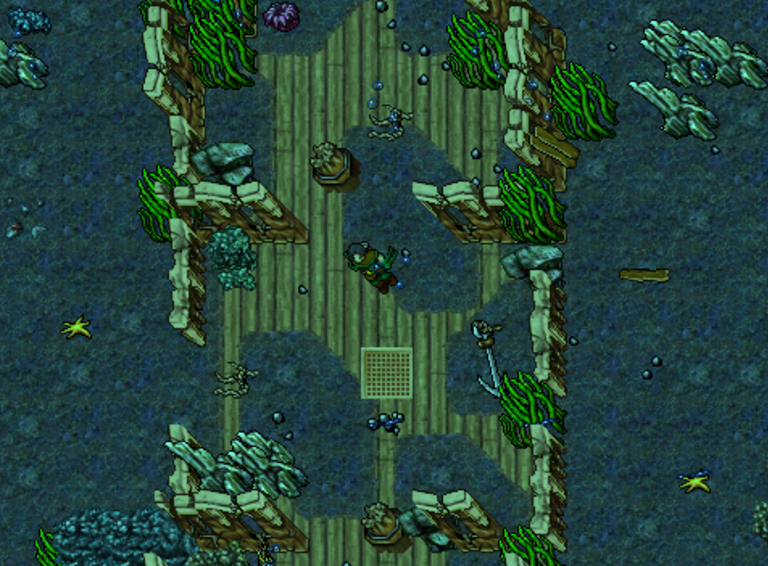 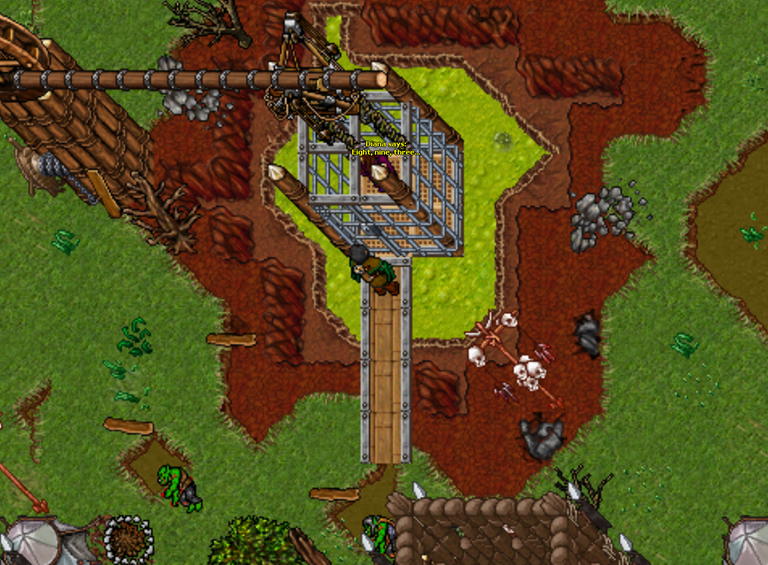 This is a fanmade game by Francisco Fonseca. Please, play and support Cipsoft's Tibia at www.tibia.com
Copyright Cipsoft GmbH. All rights reserved. Tibia is a registred trademark of Cipsoft GmbH.
My name is Francisco Fonseca, I am from Mexico and I would like to invite you to play Rookgaard Tales. I spent more than 12 years programming this game, I really put my heart into this project. This server respects the original feeling of Rookgaard, adding many new secrets and new adventures for you to enjoy. If you like Rookgaard, come and play with us! I promise you a lot of fun!
This server is 100% Free. If you want to support the server keep on mind that you won't recive any kind of benefit. ALL of the money will be used on the monthly VPS rent
Server Features:
No pay to win
No botting allowed
No multiclient allowed
RPG Server
Hunting Tasks
All items work just like real Tibia!
All outfits, addons and mounts can be obtained through quests / items!
New creatures!
New quests, including classic ones and new surprises!
New weapons!
New zones to level up faster!
Bank system!
Crafting system!
Lumberjack system!
Mining system!
Spell learning system!
Summon system!
Wedding system!
Improved fishing!
Houses!
Depots!
Blessings!
Raids!
Rare Spawns / Bosses!
Revamped areas!
NPCs from the mainland visit the island giving access to more adventures!
Many new mysteries!
Quality of content, and much more surprises!
THANK YOU FOR PLAYING!
In memory of my cat Virgilia, thanks for all the purrs 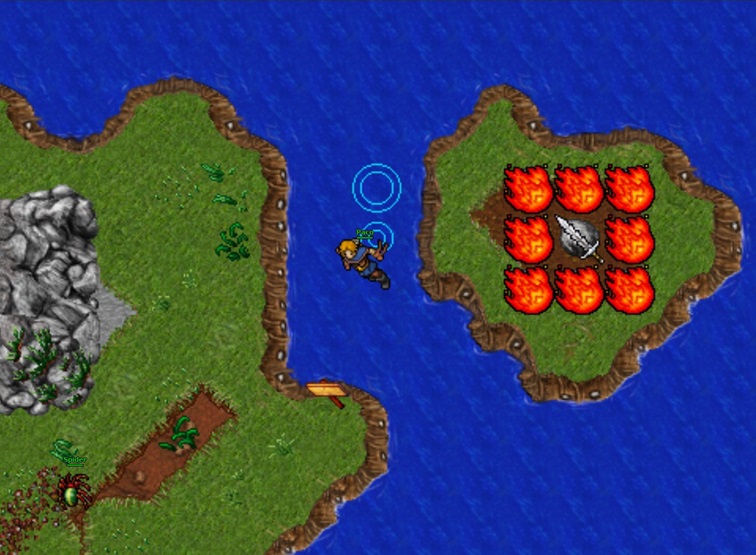 This is a non-profit fanmade game by Francisco Fonseca. Please, play and support Cipsoft's Tibia at www.tibia.com
Copyright Cipsoft GmbH. All rights reserved. Tibia is a registred trademark of Cipsoft GmbH.